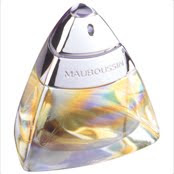 Over the weekend I wore Mauboussin. A Swap Friend sent me a mini bottle of it to test, and it warmed me considerably in the chilly rain-bucket weather we had these past few days.

I have to comment on the bottle: it looks like some futuristic paperweight, doesn’t it? Weird cropped pyramidal shape, iridescent glass… yet this mini bottle (splash type, no spray mechanism) feels nice in the hand. I feel certain that the large spray bottle would feel similarly substantial, but that it might require two hands in order to spray successfully.

Mauboussin is a fruity oriental, and if I had to describe it in one word, I’d say: fruitcake! Please don’t run away… no, really, it’s nice. I happen to like fruitcake, particularly when it’s dark with molasses and rum flavoring. Yummy. Mauboussin opens with a burst of juicy, plummy goodness, and is almost boozy in its richness. (I’m dabbing from the bottle, not spraying, which may make a difference here. It has the potential to be overwhelming, at least for a few minutes.) There is a strange note apparent in the transition from top to heart; it smells rather artificial in some unidentifiable way – a reviewer on fragrantica.com calls it “blueberry bubble gum,” which I don’t get, exactly, but it’s weird in the way that very artificial candy-type flavors are. It may be a component of the “white peach” note. After ten minutes or so, that neon note tones down, and I begin to smell a honeyed peach overlaying the florals, which include a winy rose, a ripe and creamy ylang-ylang, and a wisp of jasmine. It’s rare for me to smell all the listed notes, and there may actually be other stuff in there, of course, but I can actually tease out all three floral components here.

My favorite part of Mauboussin is the drydown, which is deep with woods, benzoin, and vanilla, and like really good cream cheese icing, has a dense, smooth, almost-tangy sweetness. This stage, upon first wearing, reminded me both of Shalimar Light (a favorite) and Fendi Theorema. However, with repeated wear and comparison to both of these other fragrances, Mauboussin is clearly different. Fruitier than Shalimar Light’s fluffy lemon-custard, richer and less dry than Theorema’s spiced woods, Mauboussin retains its not-quite-gourmand dried-fruit mantle throughout. Although amber and patchouli – both aromas that tend to stand out to me – are listed in the notes, I don’t find them to be prominent here.  The florals and woods do keep it from being entirely edible, but it is still fruitcake-y, and would be lovely in sweater weather.

During my Theorema-Shalimar Light-Mauboussin comparison experiment, one thing became quite clear to me: I love Shalimar Light (I don’t mean Eau de Shalimar, which is the updated and ruinous successor to Shalimar Light/Shalimar Eau Legere) better than either of the other two.  I didn’t mean to pull a bait-and-switch on you with my “I review one fragrance and then comment I like something else better” bit, but looks like that’s what happened.  Sorry ’bout that.  Hey, Shalimar Light is getting really tough to find, by the way.  It’s been discontinued for a few years, but I bought my bottle in May from a discounter. It now seems that SL has disappeared from all the usual discounter sites.  Curses!  I did find it, though, at bayho.com, for approximately $41, including shipping, for the 2.5 oz bottle – but just got a message from bayho that it’s “backordered.”  Which means, I’m guessing, gone.