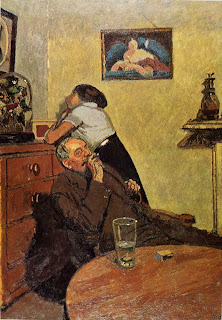 I’ve been reading with interest the posts and commentary at Perfume Posse over the last couple of days: “Taking My Sweet Time” and “Serge Is Not Your B*tch.” March and Patty are true perfumistas, fun and engaging to read, and I try not to miss their blog. (I enjoy reading Lee, Nava, Musette, and other posters there too, but March wrote the first post I’ve listed, and Patty the second. (Link here: http://www.perfumeposse.com/.)
The thrust of these articles is that sometimes, perfume critics/lovers get bored, either with the dreck currently being produced for the mass market, and/or with having to wear and review new things and therefore missing out on the scents they love. Or, with wearing a favorite scent but having to be very cerebral about it and thinking all the time about how one might write a fresh review – spending more time in one’s head than in one’s nerve endings.
Which I can understand, very easily. I like to cook, but some days it’s a struggle to get something edible and nutritious on the table… the only reason I do it is Because I’m the Mom. Because I Have To. And this blog is fun, really fun, but that may be because it’s not my job! I love to write, but I don’t have to do it, so it’s like a vacation.
And I love to sniff perfume, but it’s also true that I don’t have to do that. I’d be sniffing new things anyway, just for me – and since I’m pretty new to this perfume thing, everything smells new to me, whether it’s Lucien LeLong Indiscret (1950’s), Yves Saint Laurent Paris (1980’s), or that new Serge Lutens Fille en Aiguilles (this month!)… It’s the first time that “behind and needing to catch up” has any sort of benefit for me. And I haven’t smelled a lot of dreck, either, although I have smelled a whooooole lot of “Nice, but not thrillin’ me.” Setting out to smell “the classics” really sorts out the dreck automatically. If some 1950’s aldehydic floral or other didn’t stick around for a decade, it was probably dreck, and therefore would not even hit my radar screen, unlike a lot of the fruity floral calone fresh berry melon patchouli blah that seems to bore so many perfume writers (and who can blame them?).
A quote from a favorite book of mine, Midnight in the Garden of Good and Evil, by John Berendt:

“Well, it’s nine-thirty A.M., said Joe, “and I ain’t bored yet.”
Joe goes on to describe his morning, describing the busload of tourists scheduled to stop by for a tour of his Savannah house and have lunch, the hairdresser friend working in the kitchen, and the naked couple he found in his bed when he woke up.
“Anyhow,” he went on, “my two newest naked friends got dressed. The boy had tattooes on his arms… at this very moment, both he and the girl are in the kitchen helping make shrimp salad for forty polka dancers. Jerry’s in there too, cutting Mandy’s hair, and that’s why I say I ain’t bored yet.”

And I ain’t bored yet either – there’s too much going on. So. There you have my two cents’ worth (I take checks, if you’re wondering) on the matter. Bear in mind that I am still new to perfume interest and new to blogging, and who knows? In five years I may be so sick of perfume that I’ll choose to live the rest of my life with only a bottle of vintage Emeraude for sustenance. But I don’t think so. We’re fresh out of ennui here. If you’re all stocked up, you have my sympathy.

Go pick up Midnight in the Garden of Good and Evil at your local library, if you haven’t read it yet, by the way. It’s a fascinating read – an unusual beast of a nonfiction book that reads like a novel, based on the time that the author spent in Savannah, GA in the early 1980’s and focusing on a murder trial that took place during that time.

There also exists a movie based on the book, by the way, in case you haven’t seen it either. I have seen it, and although I do luuuuuv me some John Cusack, I wasn’t impressed. “Midnight” is the kind of book that loses a great deal in adaptation for film, since so much of the book consists of the author’s commentary (or – equally striking – lack of commentary) on the eccentric people inhabiting Savannah, and the bizarre set of events he reports. Cusack does a great job, as usual, with his detached, ironic mien, but odd characters always seem less odd on the screen than they do on the page. I found myself not caring much about the drag queens, disturbed scientists, freeloading musicians, and rich antique dealers running around the set, although I found them rather compelling within the book covers.

Well, it’s Friday afternoon, and I’m about to enjoy another utterly thrilling wet and chilly weekend, jam-packed with housecleaning, laundry, and cooking… but I’ll be wearing Mauboussin and rereading “Midnight” at bedtime. My thanks to Bergere for the Mauboussin!

Top image: “Ennui” by Walter Sickert, at unframedart.com. (Note: Walter Sickert [1860-1942] was a painter of German-English extraction, who was a student of James Whistler and friend of Edgar Degas, and whose Impressionist paintings are sombre and often brooding. This is one of Sickert’s paintings that helped to convince Patricia Cornwell, acclaimed murder-novel author and fellow Virginian, that Sickert was Jack the Ripper. If you’re not easily terrified by suspense, pick up “Portrait of a Killer/Jack the Ripper: Case Closed.” That one scared me for months. I won’t comment on her conclusions, which are derided by many Ripperologists, but her research was extensive.)
Lower image: Jacket art for “Midnight in the Garden of Good and Evil,” photo of Bonaventure Cemetery, Savannah, by Jack Leigh, at amazon.com.