Yo, so I’m not dead after all.

It was a busy-ish fall, and to be honest I am sampling fewer and fewer fragrances these days anyway, so I suppose I was feeling less need to blog about them. And most of my news seems to be about the kids.

Which is fine, really. They’ve got things going on and I kinda don’t. Maybe that’s the issue. I’m still planning on applying to grad school, and I’m still struggling with the math in the review books. I’m still working on revising the same novel that’s been giving me fits for some time now, and I’m now also working on writing a new one. I think I have some wonky programming in the blog innards, as well, so that may have contributed to my don’t-wanna-deal-with-it attitude. (I’ve heard that readers find it difficult to comment sometimes, or that new posts don’t hit their feeds for some reason. I don’t know what’s going on, I just don’t. Waaah.)

But I have missed blogging, so I would like to commit to two new blog posts a week beginning this month, one of which will probably be a Scent Diary entry and one of which will be about something else, possibly scented but quite possibly not at all. Could be food or farm or writing or my (convoluted) thoughts on this pervasive issue of sexual harassment in the workplace. Or Something Completely Different. (But no buttocks. Sorry.)

So to catch up, I’ll share a “what’s going on in my life right now” update like the ones the Non-Blonde does.

* Right now, I am addicted to cheeseball consumption. Yeah. My Aunt Becky makes the BEST cheeseballs, and I do not have her recipe. This situation must be rectified. Forget cowbell, I need more cheeseball.
* Right now, I have decorated with my Nativity set, a burlap and red berries wreath on the door (no bling. too early.), and the snow village set up on the mantel but without lights as yet. No tree. Too early. No nutcrackers. Too early. I’ll get around to decorating more probably this coming weekend, but I find that I enjoy the Christmas stuff a lot less if I put it out too soon and/or leave it out too late.
* Right now, I am pleased by the job Kenneth Branagh did with bringing “Murder on the Orient Express“ to the big screen — lushly filmed and enjoyable to watch — but also a bit disappointed by the plot changes and the absence of the tiny clues the reader had to find in the book. (Also, there is nobody Kenneth Branagh loves to direct more than Kenneth Branagh, and it’s pretty clear. Which is something of a disservice to the source material. We’re supposed to laugh at Poirot at the same time he amazes us, and you don’t get that with Ken.) In any case, see it has got me and Bookworm rereading all the early Agatha Christies we can find.
* Right now, I am enchanted by the sample of exclusive-to-Harrods and very-spendy Robert Piguet Knightsbridge I bought. It doesn’t smell exactly like the also-spendy Guerlain Charnel Elixir Floral Romantique that I like so much, but there are striking similarities: the jammy rose, the benzoin, the something-piquant-and-unusual-and-almost-gourmand (chestnut? I could swear it smelled like chestnut puree). I would like to wear more of it, but when the sample is gone it’s gone. . .
* Right now, I am engaged in crocheting chenille hats for my sister and nephews in the frozen wastelands of upper New York State. And also a pair of fingerless mitts, for me, out of some really lovely deep teal fingering yarn.
* Right now, I am thrilled that Bookworm has a job with a local materials-testing company and will be staying with us for the foreseeable future. You can follow Polymer Solutions on Facebook, if you are so inclined. They do some cool stuff.
* Right now, I am digging Hatnote, the “listen to Wikipedia” app that assigns low string notes and bell notes to various kinds of edits being made real-time to Wikipedia. It is not quite random, but has the same sort of calming effect as listening to wind chimes. 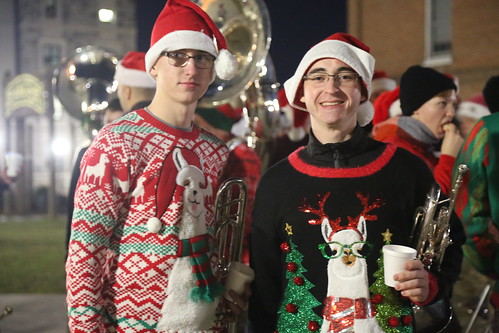 * Right now, I am amused by the Intoxicated Llama sweater Gaze bought to wear for the Blacksburg Christmas parade. The Highty Tighties were supposed to wear Ugly Christmas sweaters (with boots and cadet camo pants), and this completely toasted quadruped is what he chose. Oy. That’s Gaze on the left there; pic is from the Highty Tighties’ Flickr page.
* Right now, I am kind of stunned at the muscles Taz has suddenly grown. He’s been wandering around the house bare-chested lately. You’d think  he was proud of his guns, or something. . .

Scent of the Day is vintage (i.e., discontinued) Leonard de Leonard, an elegant floral chypre I have probably mentioned a buncha times. They sure don’t make ’em like this anymore. Lots of patchouli in this, but a green and sweet and almost chewy patchouli without a bit of the fruit that would make it smell like the ubiquitous marshmallowy fruitchoulis on department store shelves. It smells like flowers and wood and moss, and also like it would slap you upside the head for suggesting you add candy to the mix.

4 Responses to Catching Up, Early December 2017