My nose is stopped up.  This is rotten.  Not only can I not smell anything, I wake up at night because I can’t breade drough by dose.

Watched The Outsiders recently with Bookworm.  The DVD she has is the more recent 20th anniversary release, with scenes that were deleted from the 1983 theater release.  Still a great movie, still a terrific book.  When the movie came out, only a year or two after I read the book as an 8th grader, I spent my babysitting money to go see it at the theater – twice!  Partly because it’s a great story, filmed well, and partly because it is an ensemble cast of, let’s be honest here, really cute guys.  Seriously: C. Thomas Howell, Ralph Macchio, Matt Dillon, Rob Lowe, Tom Cruise, Emilio Estevez, Patrick Swayze, and Leif Garrett.  At the time, I was a Tommy Howell kind of girl; I had a poster of him up on my corkboard in my room.  Ralph was too sweet for me, Matt too edgy, and Rob too pretty.  Now, 25 years later, what I notice about the boys in the movie (who were all in their late teens while filming, except for Patrick, who was 30, and Ralph, who was 20) is different. 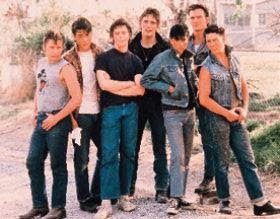 Sigh.  Well, I suppose I wouldn’t go back to being 15 again, but I can watch The Outsiders and pretend that it was a lot better than real life.

Fisher-Price has released a new toy: Elmo Live.  This animatronic wonder sings, laughs, stands, sits, tells jokes, and plays games. Holy cow, what’s the world coming to?  I hereby confess that I always hated Elmo.  Kermit was cool, Big Bird was dumb but sweet, and Oscar said what I always wished I had the guts to say.  Elmo is a toddler in red fur.  What’s so great about that?

And, most importantly, HAPPY BIRTHDAY to The CEO!  Lots of love to my favorite husband (yes, I know you’re the only one), and many years of happy life ahead.  Mwah.

* Apologies to Sir John Suckling, for cribbing/messing with his poem “The Constant Lover.”  Image is from moviestore.com.

One thought on “Random Thoughts”